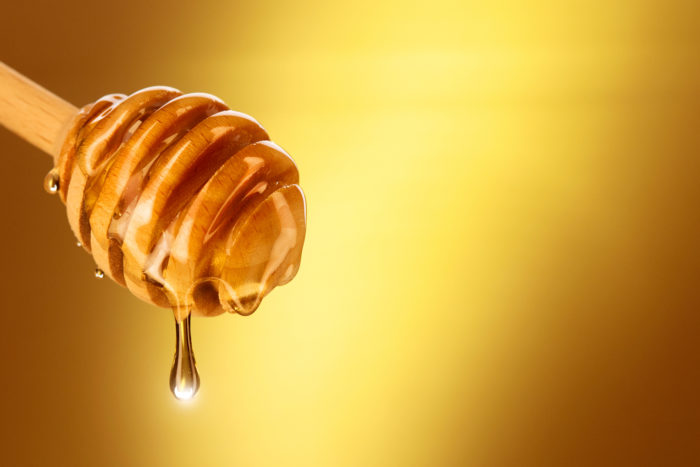 Recruitment drip marketing isn’t just the latest buzz term, but a lot of savvy sourcers and recruiters have woken up to its potential. They’re taking a page from the sales reps’ playbook and using it with some astounding results.

What Drip Marketing Is?

A drip campaign is a series of touch points usually email delivered automatically to a highly targeted prospect at predefined intervals. It is the weapon of choice in the war for talent.

As recruiters, we’ve been using blast email campaigns for way too long now. Why should your cold-blast email be worthy of a response? Such email blasts are not only useless, but they also punish your employer’s brand. Candidate expectations have changed, and our methods to attract them need to change with the times.

Imagine how much better would it be if you could send super-personalized emails to your star prospects right in their primary inbox. Bid adieu to this archaic, age-old process of email blasts and take a more human approach to it. You don’t need to “cast a wider net” and get more and more applicants. What you need is a process that achieves the human touch at scale.

When you are reaching out to more than 10 people in a day, balance the scale with personalization. Super personalize the first email outreach and then let the machine take over the rest of the touch points.

Unlike the other kinds of recruitment email campaigns, the only metric of success in a drip campaign is that of replies. Getting a reply means you need to be compelling enough for the prospect to take the effort to type out a response and hit the send button.

Your communication needs to be aligned with your employer’s brand, but here’s a no-nonsense way to go about it. There are three parts to crafting your first touchpoint email.

This is all that the recipient will see before they open the mail and make a split-second decision whether to open it or not. You get only a few words to make an impression. The Gmail iOS app shows only the first 36 characters of the subject. Make them count! A great subject line is half the work. Most people I have interacted with write subject lines as an afterthought — there couldn’t be a bigger mistake. You don’t want to write an epic like Lord of the Rings and name it “A tale of hobbits, men and elves.”

In my personal experience, mentioning the recipient’s name in the subject line, mentioning a recent blog they wrote, or an award they won, delivers really high open rates. Generic subject lines like “We’ve got an opportunity” or “Openings at Acme Inc” have abysmally low open rates.

The second part of an email is establishing a connection. This is the first thing the recipient will read after they have read the subject line. Keep them engaged. If you had mentioned their blog post in the subject, continue with a comment on that or just compliment them on their post.

This is the point where a recipient will decide whether they want to reply to the email or not. Humans tend to remember the beginning and end of emails much better than the parts in the middle. How you open a conversation plays a big role in your conversion rates. In an experiment, a group was given 20 words to read and had to recall them afterward. The experiment concluded that people could recall words in the beginning and end really well but not so much for the words in the middle.

Now that you have established a connection, you ask them something. Be upfront and clear in your message. If you already have an open position for the candidate, just tell them. Be precise about the position and what would it entail. Ask for their time over the next 2-3 days (create a sense of urgency) and close.

How to Personalize the First Email Touchpoint

I remember when a recruitment email could mail merge the recipient’s name and organization. It used to be called personalized email (this just made me realize how old I am!). However, now that this kind of personalization is ubiquitous, people feel they are spammy and they expect more. So what is the best way to personalize an email?

Find something in common

Familiarity breeds trust. Our brains are hardwired to treat familiarity with a favorable disposition. For example, if you see a person as a football fan, mentioning your favorite team or player can go a long way. To find common interests, look at your prospect’s interests, hobbies, alma mater, or even the kind of memes they love.

Another way is to find a mutual connection. This has worked really well for me. Check out this brilliant message sent to a prospect by a Google recruiter.  Your prospect is leaving their footprints everywhere on social media. All you gotta do is find it and use it! 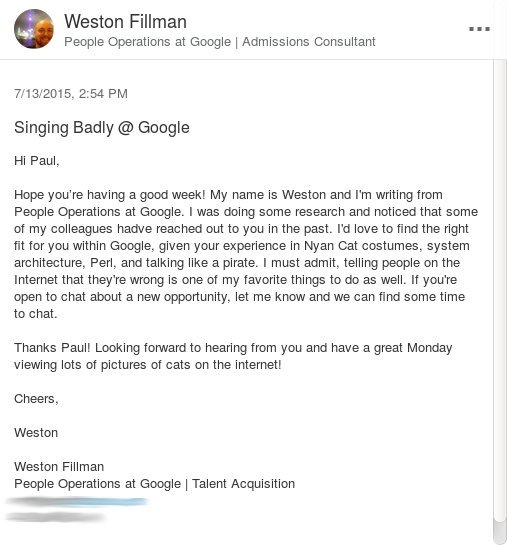 Has your prospect recently won an award, got a promotion, or their company has achieved a major milestone? Congratulate them. Flattery preempts our brains to look at the message more favorably. Compliments warm up a cold email outreach! Don’t be superficial in your praise. Be earnest and genuinely interested in their lives.

Talk about their work

It is quite possible that you found someone through Github, Medium, or even just a tweet. Mention this. Say how you found it interesting and comment on it. If possible, comment in a way that elicits a response. Raising a question is a great way to do that.

Here’s what a great first personalized email might look like. It’s better to keep experimenting on it and find the way that works best for you. 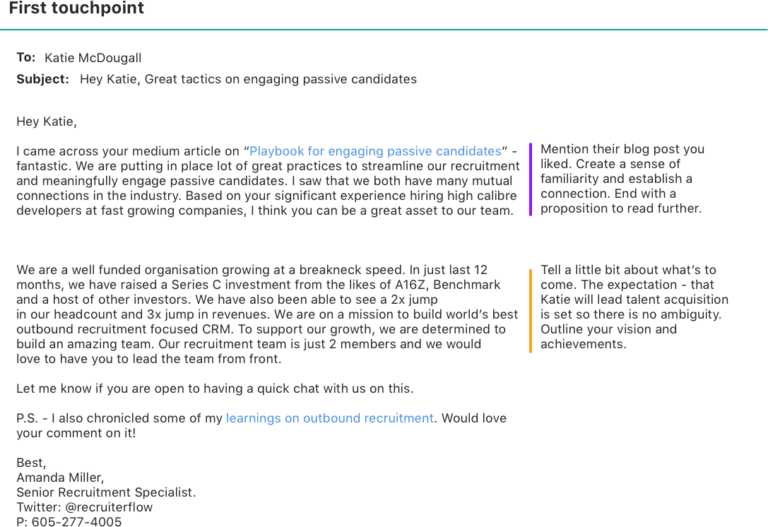 If the first email did not get you a great response despite your carefully crafted super personalized email, don’t lose heart. It’s always the second and the third touchpoint that generates the best conversions. These emails make sure that you stayed on top of the recipient’s mind. Two things to note

For the second touchpoint, pick up where you left off. Politely say you don’t know if “you missed the earlier email.” Reaffirm your value proposition with a blog post or even a Dribbble page that was a result of some exceptional work done by your team. See example.

The hiring manager and the prospect are people in the same trade and can form an instant connection. The email instills confidence in the prospect’s mind that you really want to talk to them. It’s hard to say no to that.

The final outreach is where you keep the door open for a future conversation while still trying to get a response. Keep it professional but also make sure that the candidate feels like you are really interested in them and want to talk to them.

Drip marketing is fairly easy to understand and execute. However, for the uninitiated to get started quickly, I’ve put together a list of basic dos and don’ts. It’s primarily distilled from my own experience and the experience of others that I have worked with.

This article was originally written for ERE media.

Use Recruiterflow to source candidates with super personalized drip email campaigns that convert 2.3X better.
Get Started for Free.