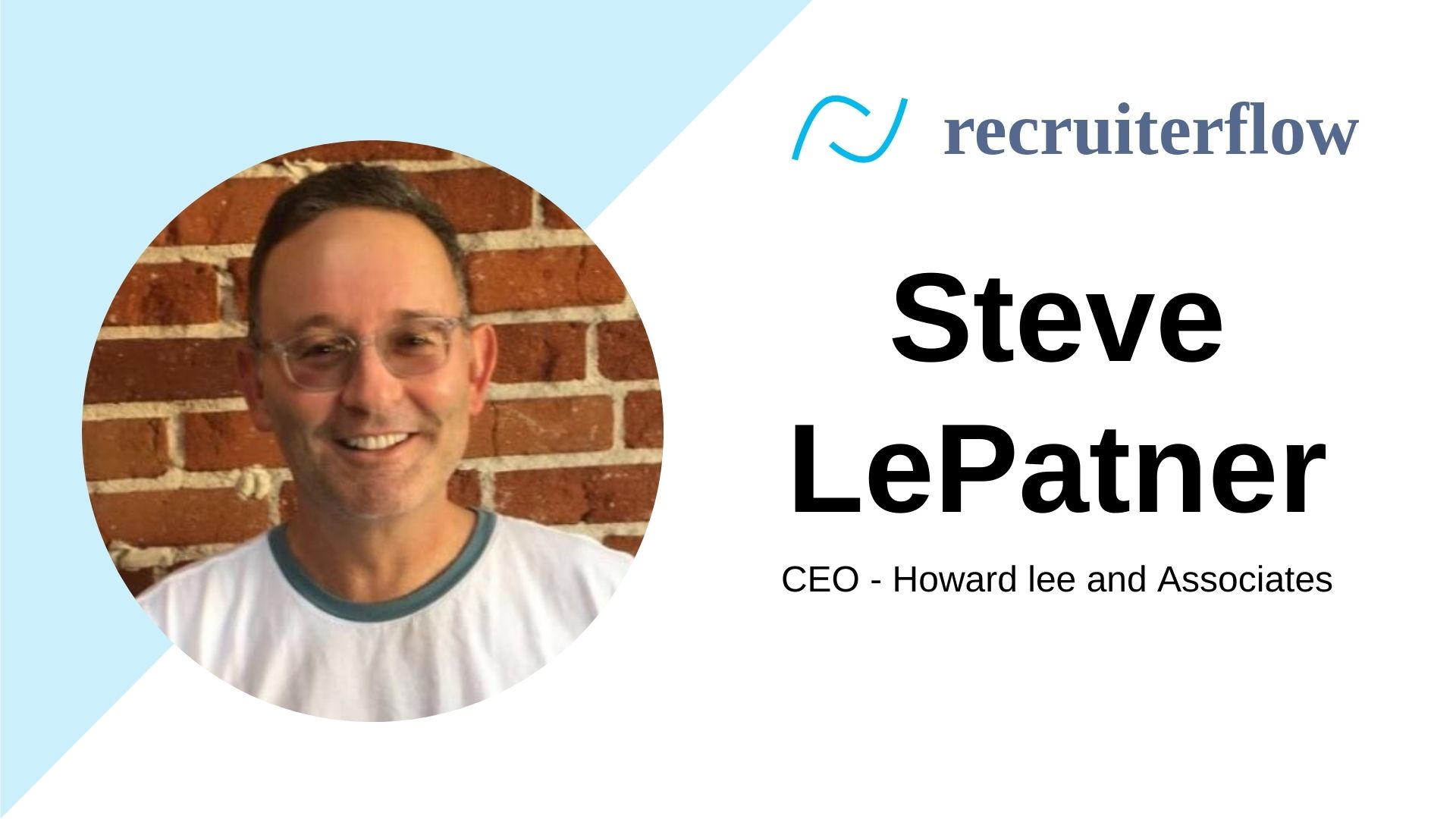 Synopsis
Howard Lee is an executive search firm founded by Steve LePatner in 2002. The firm focuses on finding and placing exceptional sales talent for software companies.

Howard Lee wanted a way to organize their workflow and data in a way that helps them keep track of all the activities and maintain top-notch data fidelity. Their extensive search led them to shortlist Recruiterflow and after a considerable amount of testing, they zeroed in on Recruiterflow as a choice for their ATS & CRM.

After the implementation of Recruiterflow, they’ve been able to increase their revenue by 20%, increase fill rates and see a considerable jump in their recruiting productivity.

The story of Howard Lee Associates

Steve’s father used to run a headhunting business in Southern California back in the day. Looking at how lucrative the business can be, Steve moved from selling insurance in Beverly Hills to being a headhunter. As a salesperson himself, he knew how to identify top sales talent. The software industry, although in its infancy at the time, was growing fast and Steve decided to jump in.

Steve tried multiple software and always found something missing. They were having trouble organizing their data for a headhunting environment and a few support issues with the previous platform.

This set Steve and Alex, (his Business Development Manager), searching for their next software when they came across Recruiterflow.

“As headhunters, we spend a lot of time on LinkedIn, emails, and on calls with people. We had issues with our old platform regarding how our data is organized and retrieved.

I wanted something that helps us build our database and workflow the way we wanted. I wanted a perfect combination of automation, data fidelity, customizable workflow, and productivity – something that allowed us to do our jobs faster while making sure that everything in the background keeps humming along smoothly.

Also, I needed something that was visual and easy to use. It was important for our team members to see what they are supposed to do at any point and quickly get it done. Recruiterflow has been fantastic on this front.”

“Setting up the system was simple and fast. We were able to quickly set up our pipelines, workflows, and processes which helped us get to submissions faster.  Now that we had all of our job orders in one place and a setup for our candidate pipeline, Recruiterflow gave us the flexibility to work the way we needed to.

We had to make a couple of tweaks to the system at first,  but it wasn’t anything that was too convoluted. I think that anytime you change databases or software systems, there’s always some need to make a few changes. I also think Recruiterflow gave us some ideas on ways we could also improve our workflow too, which is great. “

Recruiterflow comes equipped with top-notch recruitment automation features that help you minimize admin work and automate the repetitive and mundane. Our campaigns and recipe modules are built to help you build long-lasting relationships and take the mundane out of your day.

“It has also helped us automate a whole lot of our work. Now, when a candidate gets hired,  we can automate things so that our project manager and billing coordinator can also stay updated, and then send out the respective bills.

The workflow is seamless now and that takes a great deal of pressure off me. These are things that I just don’t want to worry about. I want to just to be like, okay, good, this guy got hired. The bill goes out and that’s that. This system allows for all that to flow seamlessly now, which works so well for us.  “

Recruiterflow is intuitive and simple to use. Recruiting requires speed and if it takes you a lot of clicks to do something, that’s wasted time that could have been spent doing your job – building relationships.

“Another huge plus for me personally is the way all the information is laid out. I am a very visual person. I’ve been able to retrieve the information I need very very quickly and do what I need to do.

Also, I am a big fan of the way it is integrated with other tools that we use. The integration with LinkedIn and Gmail makes sure that I don’t have to toggle back and forth a zillion times between different tabs to see something or log any information. Everything is there, wherever I am working!

It allows me to work on my business the way I need to. “

With a wide range of custom fields, resume parsing, and links with LinkedIn, Recruiterflow helps you build your database the way you want. We help you quickly detect duplicates and input data in a way that is accessible and searchable.

“Another great thing is that we have way better data integrity now. It is hard to put it in numbers but it has been great for business. This is mostly because of the ability to input and filter data. Recruiterflow has decreased manual data entry and has made data input and segmentation really easy. Since it is super easy to put in data, our team is now able to really structure our database and makes it really easy and quick for us to go back to our old candidates and make placements.

It has allowed us to be more diligent about putting in data and information now- including personal cell phones, personal emails, and most importantly area codes and zip codes. I needed a way to find candidates in specific areas. A candidate located in the 415 area (San Francisco) is typically not going to go out to work anywhere other than that geography.

Recruiterflow has made it possible for us to filter candidates by their geographic circles. I tell all my team members now,  that if we have a candidate that’s in San Francisco, I want it indicated somewhere that they’re in the 415.

In Los Angeles, again, someone in the 818 is not going to go down to the 949 in Orange County. That’s just too long a drive. Distance-wise, if you look on a map, it doesn’t seem like that’s not going to be a big deal. It’s just an hour. But that hour-long drive can be a two-and-a-half-hour adventure every day. People are not going to sign up for that, or if they do, they’re going to get burned out and not stay at that job.

Inputting this data is not an overnight process, of course. We’ve got to make sure that when we’re talking to a candidate or when we get a resume or whatever the case might be, we’re inputting this information. Now when a client says they need a candidate in Orange County or any other particular area, we can pull candidates that match that criteria. The ability to separate candidates like this is really important to me, and that is a big plus in this database!

Other databases say they can do it, but they don’t do it as well. We now have the capability and it is absolutely phenomenal. This is a very, very valuable feature and more people should understand its significance of this. It’s a real selling point.

Let’s say you’re in a competition with another firm. They submit a candidate who says they’re going to make the journey out there but I have a candidate that actually lives in the area. He’s got a one-mile radius to get to the office. Which candidate do you think is going to stay with the company? Yes, no one’s going to an office right now, but when the pandemic ends, the client may want someone to come. I’ve won deals like this! “

Over the last few years, the recruiter’s expectations of what an ATS+CRM can do for them have evolved. Recruiterflow is not just a system of record to store your data but rather a system of productivity that helps you organize your work better and get more done every day! Recruiterflow’s ease of use, automation, and relationship tracking help you continuously measure your performance and improve on them.

“I think we’ve become much faster. In general, our speed has increased by an easy 30-40%.

After implementing Recruiterflow, Howard Lee & Associates have seen improvements in their key metrics.

“Our business has gone up a lot, and there are two reasons for that. One – the database definitely helped because everything’s much more organized now. The second reason is my health has improved. So I think with the two combined, I could say we have seen more than a 20% increase without any additional overhead! That’s the kind of power you can unlock when you put data and processes in place.

Also, I think we now work much better as a team and this is difficult to put in a number. However, I can say that because we can execute our plans to near perfection, we’ve been able to become much faster. We are at least 30-40% faster now and that has allowed us to deliver superior results for our clients.

Another thing is we have a better fill rate. Recruiting industry operates at a close to 22% fill rate. At Howard Lee, we do significantly better. I won’t give the exact number but it’s way better than that!”

Steve believes that Recruiterflow will help his team continuously improve and thrive in the coming years. Watch the entire conversation with our co-founder Manan Shah in the video below.

Ifrah Nasser is a Content Marketing Manager at Recruiterflow. In her free time, you can find her playing word games, binge-watching Netflix shows, painting, or eating cheese.

How To Create The Perfect Recruiting Sales Pitch